As a practicing psychiatrist for over 8 years, I have experienced both great and frustrating results with psychiatric medications. My results are consistent with the largest antidepressant studied by the National Institutes of Mental Health. The study was called STAR*D (Sequenced Treatment Alternatives for the Relief of Depression. This definitive study on the treatment of depression showed that only one in three patients reach remission with their first antidepressant drug attempt.  With each successive attempt, the chance of success decreased, and the probability of problems tolerating the drug treatment increased.  Click Here to Download the PDF of this article in our Winter 2016 Newsletter. 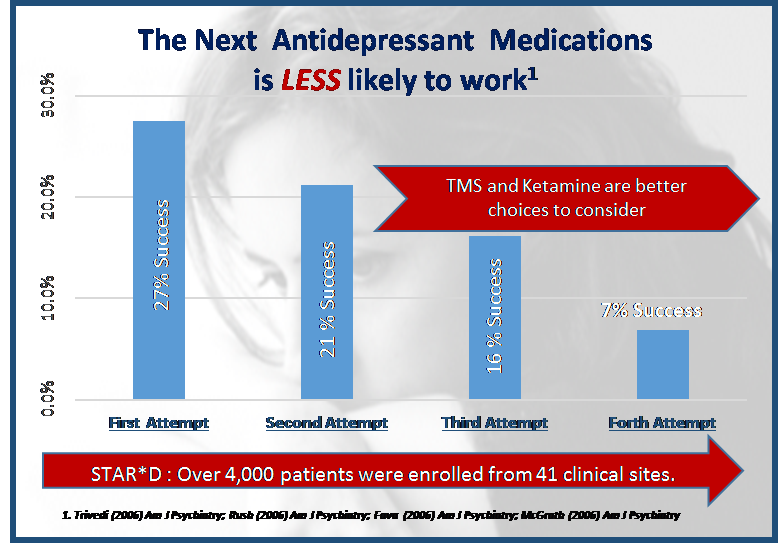 You can see by the graph above that drug treatment’s success diminishes with each successive trial, and the data also shows that there is an increased chance in the number and intensity of side-effects which may lead to loss of treatment adherence.

About TMS (Transcranial Magnetic Stimulation) Therapy TMS therapy was cleared by the FDA in 2008 for treatment of depression that had not improved after the failure of at least one antidepressant. Since that time, over 1 million TMS therapy treatments have been performed with a high amount of success and minimal side effects.  As our region’s leading TMS provider, we have even seen excellent results in patients who have suffered for years with both chronic depression and anxiety.

Who Can Transcranial Magnetic Stimulation Help?

TMS is now covered in Montana and our area by:

There has been a great deal of excitement in the world of psychiatry and brain health over the past few years as studies continue to point to rapid, robust antidepressant effects of IV Ketamine infusions.  While ketamine has been in use as an anesthetic in surgical and ER settings since the 1970’s, the antidepressant application of this medication has been realized more recently.  While most antidepressants may take several weeks to take effect, studies show 50-80% of people report significant improvement in symptoms after 1-2 infusions.  Ketamine is showing promise for treating other conditions including PTSD, severe anxiety, OCD, and suicidal thoughts. At Montana Psychiatry, our patient response rate for ketamine therapy has been near 90%!

For more information about Ketamine Therapy, visit our website at mtpsychiatry.com or call our office at (406) 839-2985. To learn more about Dr. Erin Amato click here. TMS therapy and IV Ketamine Infusion Therapy are now available at Montana Psychiatry where we provide treatment in a private, outpatient, comfort-centered environment.